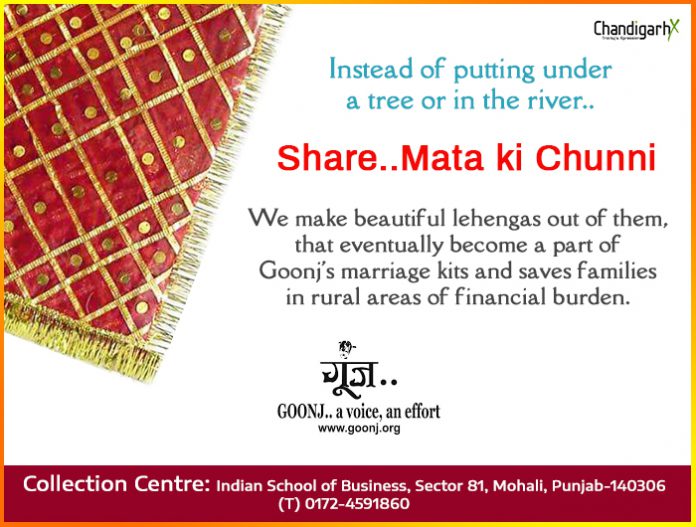 An Indian wedding is a grand occasion, colourful and lavish with a lot of pomp and show. It is like a festival. The merriment and euphoria all around, create an aura of joy and elation. The word ‘Indian wedding’ carries a whole baggage of an entire fortune which people long to spend. Undoubtedly, a child’s marriage is the costliest of financial goals for several families who have limited means to spend. Considering this, Goonj- a Delhi based NGO has taken an out of the box initiative. They make sure that people with less money are able to plan their functions well. Also, they end up with almost everything they desire for in their budget.

Goonj has been involved in collecting used wedding clothing from urban cities. They remodel them and distribute in rural villages. Under the same process, they reuse ‘mata ki chunni’ to make lehengas for brides. This is used in bulk during religious ceremonies.

Instead of discarding these under a tree or in the river, Goonj requests people to give them these chunnis. Being aware of the needs of less priviledged is an appreciable step by the NGO.

It is a fact that using some skill and innovation Goonj is producing surprisingly beautiful clothes. During production, they include an array of items such as clothing, footwear, purses, makeup, jewelry, bed sheets and a set of utensils. Goonj has delivered hundreds of kits in Uttarakhand, Madhya Pradesh, and Bihar, making several lives happier than ever.

A non-governmental organisation headquartered in Delhi, India which undertakes disaster relief, humanitarian aid and community development in parts of 23 states across India. The focus is on clothing as a basic but unaddressed need.

It was founded in 1999 by Anshu Gupta. For his work with Goonj, he was awarded the Ramon Magsaysay Award in 2015. In 2012, he was named India’s Social Entrepreneur of the Year 2012 by Schwab Foundation, a sister organization of World Economic Forum.