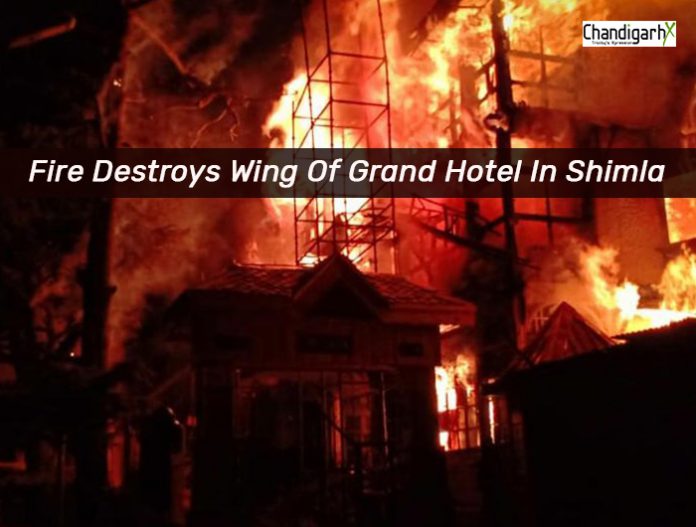 Mayo Block of the historic Grand Hotel was gutted in a fire that broke out past midnight here today. Constructed during the British time, the building is now a Holiday Home of the Central government. Mayo Block was a VVIP wing, and was recently renovated and lavishly furnished. It is usually fully occupied on week-ends, but fortunately as the building was under renovation, there was no guest. Tall flames were visible from various parts of the town. The hotel is located on a crest, close to Kali Bari temple. It is about 200 m from Scandal Point, adjoining the historic Bantony heritage building.

The fire broke out around 12.50 am and a police patrol informed the fire station. Fire tenders were rushed from the Mall Road, Chhota Shimla, and Boileaugang fire stations, but shortage of water hampered the operations as there was no pressure in the hydrants.

Shimla Deputy Commissioner Rajeshwar Goel, who reached the spot along with SP Omapati Jamwal and Municipal Commissioner Pankaj Rai, said firemen, police and the army assisted in dousing the fire, and it was not allowed to spread to other buildings.

No employee of Grand Hotel was available, and police had to break open the main gate to enter the premises. Had employees of the hotel arrived in time and informed us that there was a huge overhead water tank, the building could have been saved, firemen said.

The cause of fire could not be immediately ascertained. The fire was brought control around 3 am but the debris was still smouldering.