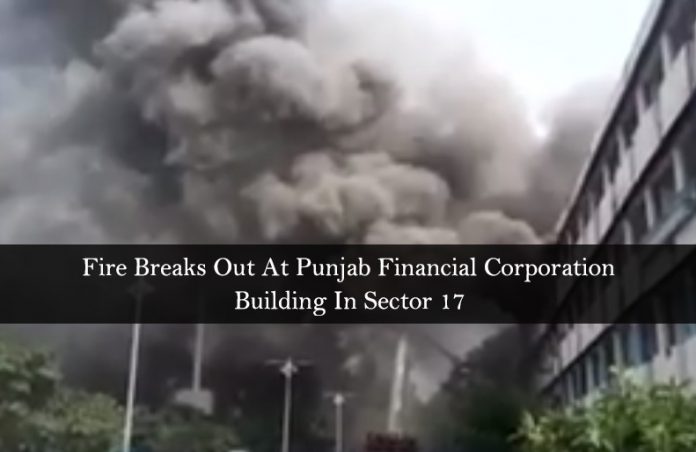 Fire breaks out at Punjab Financial Corporation building near SBI in Bank Square Sector 17. The fourth floor of the building which houses the Punjab treasury and accounts office went up in flames.

The fire broke out around 3pm and the police immediately cordoned off the area and eight fire tenders went on to douse the flames. The SCO 95-96 specifically were engulfed in fire and after two hours, the firemen successfully brought it under control, but it was too late for the panic to become widespread in the heart of the city.

The firemen lost 30 crucial minutes to reach the spot due to jam packed Sec 17 parking.

The treasury office lied vacant with old files and furniture, which were gutted, as the office has been to Punjab Yojana Bhawan, Sec 33.

The fire was first noticed by labourers and electricians who were working there to remove the ACs and fans.

HOW THE FIRE BROKE OUT?

The reason is still unknown, but it is said it can be due to a short circuit.

The building’s fire system was also not working which only led it to wear such high proportion. Hydrants, detectors, hose reel, sprinklers, smoke detectors and water tank, nothing was working.

The fire incident has again brought to the fore the pathetic fire safety arrangements in Sector 17, one of the most crowded areas in the city.  The Bank Square itself has been the victim of two major fire incidents in past 6 years.

Please make sure your office space and home has proper fire safety equipment installed and everyone should be taught how to use it in case of emergency.