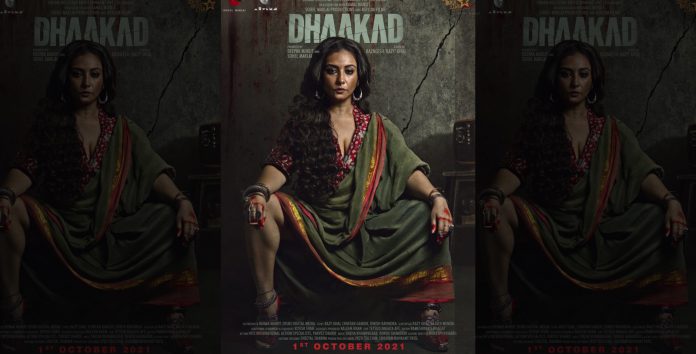 Dhaakad is set to be India’s first high octane spy thriller led by a female superstar. The makers of the film recently released posters featuring Kangana Ranaut and announced  film will release in cinemas on Gandhi Jayanti weekend. The poster was soon followed by the introduction of Arjun Rampal as the main antagonist. Both the posters received excellent response and audience gave a big thumbs up to the action packed vibe of the film.

And now, the makers of Dhaakad have released the third poster of the film reveals the look of Divya Dutta in a menacing looking avatar. With smouldering and piercing eyes, she looks fierce, bold and deadly. Divya Dutta is one of the most credible actors we have today and  has  not only shown exemplary range in her acting but is also known for bringing dynamism through her characters in films.

Talking about it, Divya said, “When I was narrated the part, it got me very excited. This is something that I have not done before and the character is completely different from how I am as a person.I cannot reveal much about my character but all I can say that to get into the skin of my character, Rohini took a lot of focus  and preparation mentally as well. I am looking forward to working with Kangana and Arjun and I am truly exhilarated to be a part of a woman-oriented action film. I am sure that Dhaakad will set a trend.” Dhaakad, touted to be a world class spy thriller, is directed by Razneesh Razy Ghai and produced by Deepak Mukut and Sohel Maklai. Presented by Soham Rockstar Entertainment Pvt Ltd in association with Kamal Mukut, Sohel Maklai Productions and Asylum films, Dhaakad is slated to release on October 1, 2021.