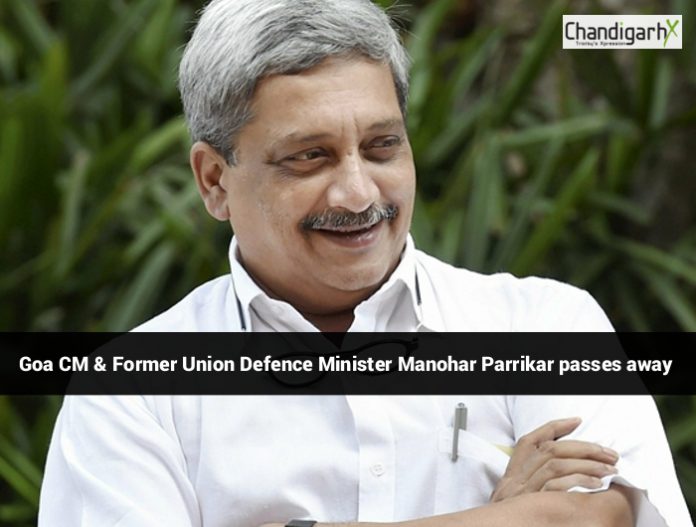 Goa chief minister Manohar Parrikar, 63, died at his residence in Panaji on Sunday. The Centre announced a national mourning even as tributes flowed in from across the political spectrum.

Parrikar was diagnosed with advanced pancreatic cancer in February last year and was repeatedly admitted to hospitals in Goa, Mumbai, New Delhi and New York. His mortal remains will be cremated in Panaji on Monday evening after they are kept at the BJP’s state headquarters for political leaders and the public to pay their finals respects, according to an official statement.

Manohar Gopalkrishna Prabhu Parrikar belonged to a business family in Parra village (from which his family derives its name). He not only dominated state politics for two decades but was also a rare national leader from Goa. Goa chief minister Manohar Parrikar died at his residence in Panaji on Sunday, prompting the Centre to announce a national mourning even as tributes flowed in from across the political spectrum

From the moment he became the state’s first Bharatiya Janata Party (BJP) chief minister in October 2000- Parrikar became the mainstay of Goa politics.

A half-sleeved untucked shirt and leather sandals were to become his trademark attire. Parrikar liked wearing this and his flip-flops even during the height of Delhi’s harsh winters, which he could never warm to. His brisk pace and replies that went beyond “I will look into it” crafted an image of a professional-turned-politician. Ambition, acumen, and the willingness to battle it out, helped the Indian Institute of Technology-Bombay graduate be recognised as a “technocrat chief minister”.

Parrikar was the man in-charge of Goa between 2000 and 2005 (two terms from 2000-2002 and 2002-2005). He shot onto the national stage for his decisiveness. He projected himself as a leader across religious boundaries; and uniquely managed to woo the state’s 26% Catholic community despite being a Hindu.

His reputation was enhanced by successfully hosting the International Film Festival of India in 2004. A small state like Goa, which critics once said lacked a “film culture”, successfully hosted the event, and continues to do so to this day.

Parrikar’s greatest contribution to the Indian military establishment was the one-rank, one-pension scheme or OROP. Even when finance and defence ministry mandarins cringed at the financial implications of the proposal, he would prepare financial flowcharts to extrapolate the cost to the exchequer. To the naysayers, he would say that if PM Narendra Modi had promised it, it must be delivered.

Parrikar’s other major contribution was the implementation of the Shekatkar committee recommendations to make the army fighting fit along with the replenishment of much required ammunition.

He leaves behind impressive civic infrastructure, including signature bridges and sports stadiums constructed during his tenure.

Parrikar’s stint in the Union Cabinet (2014-2016), along with his long run as CM of Goa, makes him the tallest leader the state has produced. But rather than be remembered for his time in Delhi, Parrikar was most comfortable in the state where his writ ran large.