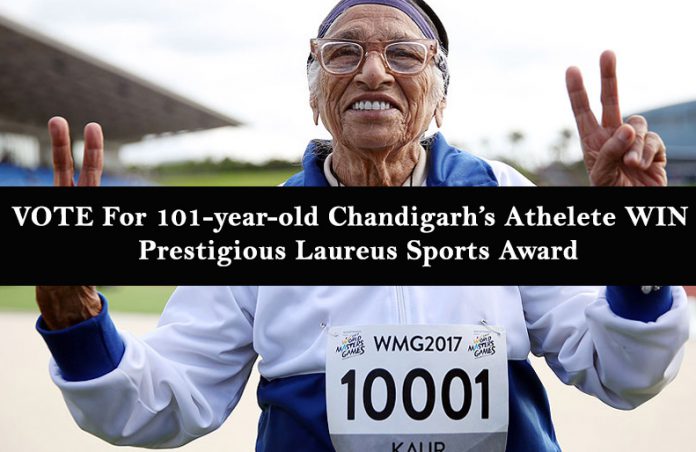 Four months ago, a 101-year-old Chandigarh woman sprinter bagged gold medal in the 100 metre race in the 100+ category in the World Masters Games in Auckland, New Zealand and the media dubbed her “Miracle from Chandigarh”.

She is Ms. Mann Kaur.

Now, she has been nominated along with five other international athletes for the ‘Laureus Best Sporting Moment Of The Year 2018’ competition. Her feat of winning the gold medal has been shortlisted among six videos for the month of September chosen by sporting legends from the Laureus World Sports Academy.

About ‘Laureus Best Sporting Moment Of The Year 2018’ competition

♦ Every month 6 such inspiring moments are selected and online voting is opened for that month. This month’s Mann Kaur is competing with:

→ Abbey’s heart lives on – Bill Conner cycles over 2,000 miles to honour his deceased daughter and her organ donation

♦ The five monthly winners will then compete in a final public vote to decide the winner which will be announced at the Laureus World Sports Awards ceremony.

WHERE & HOW TO VOTE

♦ Select the video you link, press the link VOTE below, add your contact details and press vote.

Kaur’s video titles ‘age is just a number’ currently has 3.9 per cent of public votes for September. Formula 4 driver Billy Monger is currently leading with a 63.3 per cent public votes online.

“It’s a huge honour for me to be nominated for the award. Ene sare years di mehnat da natiza hai ki aaj main nominate hoi (It is the result of my hard work). Winning the gold medal in Auckland is very special for me as moments like those inspire me to continue running. To be among the six athletes for September, whose moments defined the world of sports, is a morale boosting thing for me,” said the athlete while talking with Chandigarh Newsline from Patiala.

ABOUT THE INSPIRATION HERSELF: Mann Kaur

Aged 101, Mann Kaur took up athletics only eight years ago, at the tender age of 93. She had no prior sporting experience in athletics. It was on her son’s, Gurdev Singh, suggestion she joined him in competing on the International Masters Games circuit.

After a green signal in a medical check-up, there has been no looking back for her. The mother and son have participated in dozens of Masters athletics meets around the globe.

The centenarian already has a swag of gold medals that would rival Michael Phelps’ haul and also plans to compete in the 200m sprint, two-kilogramme shot put and 400 gram javelin in Auckland, taking her medal tally to 20.

She has 17 gold medals to her kitty that too in 8 years of running professionally.

VOTE FOR HER HERE: www.mylaureus.com