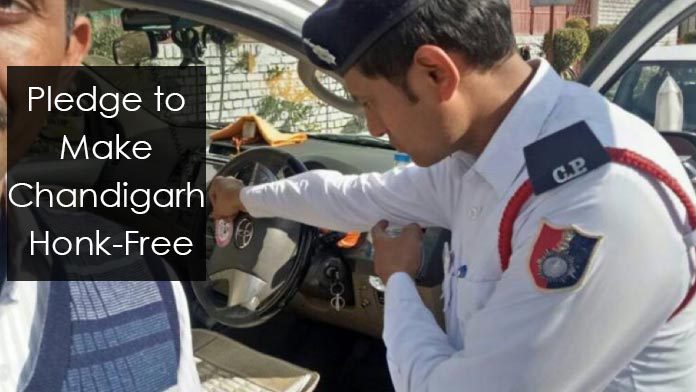 In first few days of new year 2018, the Chandigarh Police had made its resolution clear to make Chandigarh honk-free city.

Turning its words into actions, SSP (traffic) Shashank Anand has begun a 45-day long campaign to create awareness amongst motorists on Chandigarh roads. Chandigarh traffic police is seen either pasting stickers on steering wheels of cars and two-wheelers or talking about the ‘honk-free city’ campaign to people and distributing them the stickers.

SSP Anand had appealed to people to take a pledge ‘I will not honk’ and asked people to flaunt the stickers on twitter with #MakeChandigarhHonkFree.

Over the past week, 1000s of stickers have been distributed, many have taken to social media to show their support to the campaign.

The stickers are available for free at Children Traffic Park in Sector 23.

The honk-free Chandigarh is modelled on Kathmandu’s traffic police’s success story where in less than six months with spreading awareness and imposing fines, they were able to effectively check honking.

The Section 177 of the Motor Vehicles Act, 1988, prescribes a penalty against the driver for honking. Those caught honking can be fined up to Rs 1,000.

Join in. Take a pledge to make Chandigarh quiter city – a honk-free city.