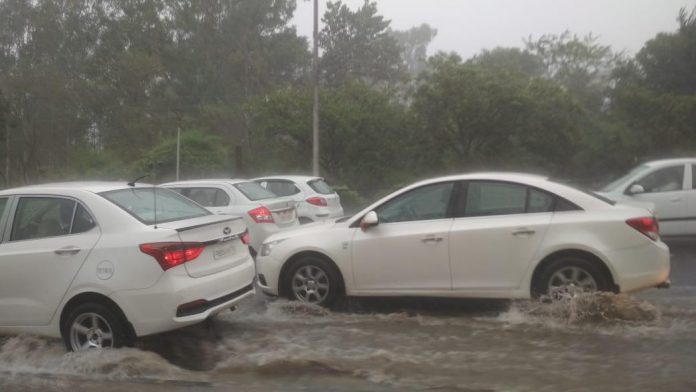 The Chandigarh Municipal Corporation spends more than Rs 1 crore every year on cleaning road gullies and maintaining sewerage and drainage system. Still there is no visible solution to waterlogging in the city. Just in the beginning of heavy rains lashing the city on Tuesday morning, the MC’s tall claims stand failed. Only three hours of rainfall led to waterlogging. Not only on main roads, but similar position was visible in sector dividing roads and internal roads.

Water logging led to traffic jams in different parts of the city. During morning hours, be it Madhya Marg, Dakshin Marg or Sarovar Path, long queues and stranded vehicles were easily seen. Adding to the misery of commuters were the potholes and water logged roads after the rain.

There are around 30,000 road gullies in the city. The municipality claims that they have cleaned these before the monsoons started.

Similar situation was witnessed at Matka Chowk on Madhya Marg. Even the colonies and villages were worst affected. Palsora village, Burail and Industrial Area saw water enter in the houses. Commuters also faced tough time in areas like CTU workshop, Chandigarh-Panchkula road near Housing Board lights.

There were major problems in dividing roads of Sector 20-21 and Sector 18-19. Number of vehicles got stuck in water which resulted in traffic jams. Ultimately, traffic cops came to their rescue.