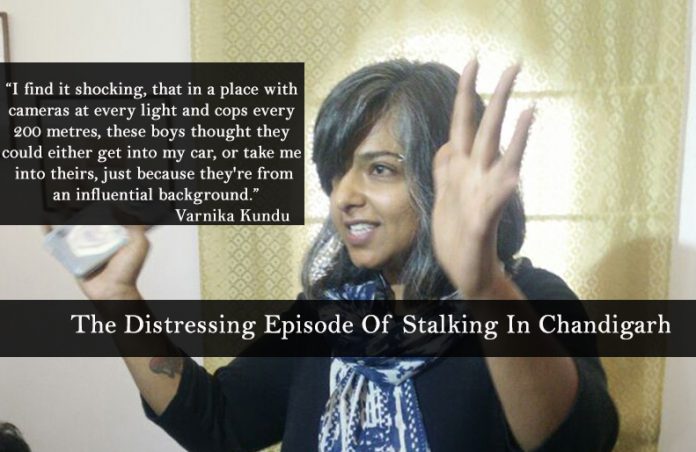 Since past two days, the nation has been stirred with the news of two politically connected boys stalking Panchkula posted IAS daughter in Chandigarh in wee hours for 7 kms for well over 25 minutes.

Generally the victims of sexual harassment and stalking cases do not reveal their identities, but this brave woman has has chosen to come out in light and share her ordeal rather than ‘hiding’.

She boldly says, “Why should I hide my identity when I am the survivor and not the accused?”

She is Varnika Kundu, a DJ, daughter of Virender Kundu, IAS (Haryana cadre), working with Haryana government, a girl who lives an unconventional life on her own terms. She is a black belt in the martial art of Choi Kwang-Do and believes that it was her training that helped her remain calm in the face of adversity.

She took to facebook to share her spine-chilling experience on Chandigarh roads in the wee hours of Saturday, August 5, 2017.

Her father wrote on Facebook: “I will be failing in my duty as a father to my daughter if I did not stand with her completely in this matter… As a father of two daughters, I feel compelled to take this matter to its logical conclusion. The goons must be punished, and the law must take its course. As would be expected, the goons are from influential families. We all know most such cases of harassment go unpunished and even unreported. We know it’s not going to be an easy struggle.” 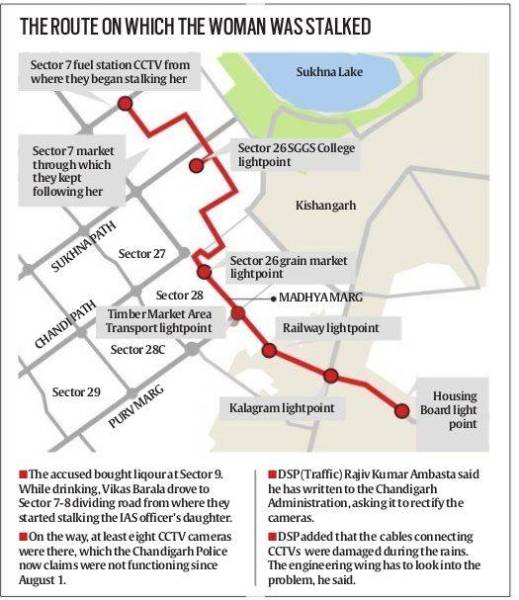 But what is distressing and disgusting about the whole issue the way the political leaders have resorted to victim-shaming.

“A girl is far more responsible for rape than a boy.”

“A decent girl won’t roam around at 9 o’clock at night. A girl is far more responsible for rape than a boy. Boy and girl are not equal. Housework and housekeeping is for girls, not roaming in discos and bars at night doing wrong things, wearing wrong clothes. About 20 per cent of girls are good. When being raped, she shouldn’t fight back. She should just be silent and allow the rape. Then they’d have dropped her off after ‘doing her’, and only hit the boy. You can’t clap with one hand – it takes two hands.”

Later he said he was misquoted.

Shaina NC, BJP spokesperson, claimed that her facebook and twitter accounts were hacked when the posts on victim-blaming got live on her accounts. 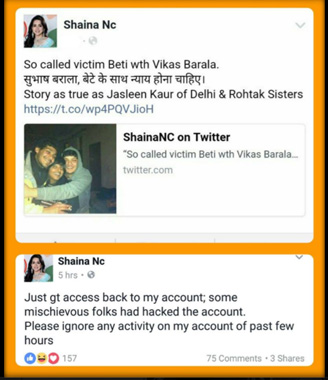 The flip-flop in the investigation

Varnika in her compliant, which subsequently formed the subject matter of the FIR, she had specifically said that an attempt was made to kidnap her. “To the SHO, Police Station Sector 26, Chandigarh. Subject — Complaint regarding harassment and attempt to kidnap and outrage the modesty of a girl”, reads the FIR.

She added, “To me, it was very clear that these boys intended to abduct me even tried to open the door. Kindly file an FIR under the appropriate sections of law.” However, Chandigarh Police did not include sections on attempt to kidnap — which is a stronger charge, and has serious legal repercussions — in the FIR. They instead put bailable charges — stalking and wrongful restraint — and released both accused on bail.

The police claimed that they had no CCTV footage of stalking incident as the cameras were “non-functional” since August 1. But, later on Monday, DGP Tejinder Singh Luthra told The Indian Express that police have obtained CCTV footage which shows the “victim was being chased by the accused”. “We have procured footage establishing that the victim was being chased by accused in a Tata Safari. I cannot divulge the source of footage… these are either the police’s CCTV cameras or those privately installed,” said Luthra.

The CCTV footage of the stalking incident:

Varnika recalls her harrowing incident of being stalked:

But, the brave girl is unperturbed by these accusations and is not concerned about whether the accused to be punished or not. She just wants girls to empower themselves and speak up when they think anything wrong goes against them. 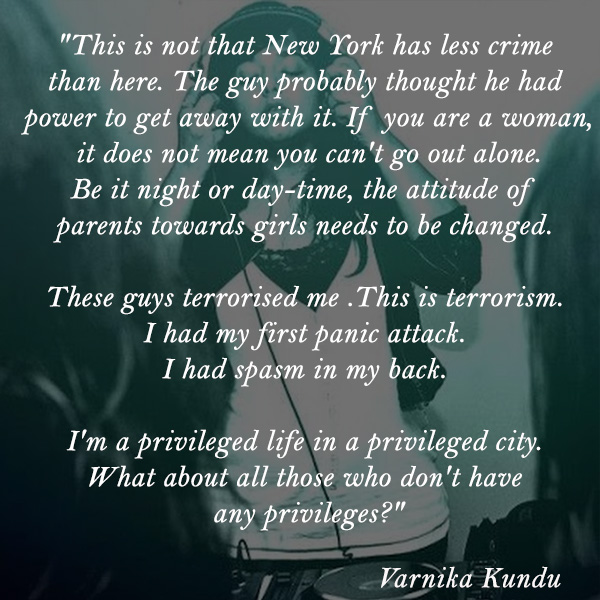