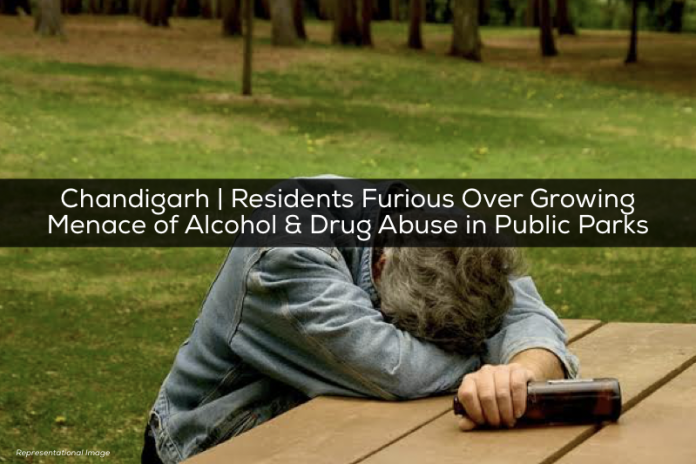 A visit to any park during morning or evening may leave you shocked to find people having beer, smoking marijuana or even taking drugs. Neglected, lesser visited and zero policing in some places in the city are creating spaces for illicit activities.

Times of India conducted a reality check for the rise in alcohol and drug problem in the city. As per reports, they found the drug problem is rampant among even school children now openly without any fear of law.

Residents living nearby are furious. They say that the police are focused on catching people consuming liquor at public places, they hardly check parks.

How Can We Help

A similar scene could be spotted at parks in sectors 7, 8, 9 and even Leisure Valley. Not heeding to residents taking a stroll near them or displaying the terror of police catching them in the act, youngsters were seen abusing hard drugs while drinking alcohol. This has led to the residents subsequently altering their everyday routine.

According to a retired Army officer and a resident of Sector 8 Sukhwinder Singh, now they fear going for a walk in parks. Youngsters openly take drugs with little or no check on them. He suggests that the police must take strict action against such illicit activities.

He added that even after they had informed the police control room and beat officer concerned, no action had been taken. Moreover, they fear that those hooked to drugs might indulge in some criminal activity in their neighbourhood.

No Check On Identity Cards

Easy availability is a major factor that caused this. The youngsters claim that they buy alcohol and drugs from vendors with no trouble. They too provide them without examining their identity cards.

December 11, 2019: A 45-year old woman journalist was allegedly viciously molested in Panjab University while on her morning walk.

As per SP Vineet Kumar, it was a matter of concern.

To be able to check the rampant spread of drugs, the officer recommended the following:

So, next time you see any youngster having alcohol or drugs in parks, don’t turn a blind eye. Click his picture to be shared with your beat in charge. You can also share your views with us on what should be done to rid these places of nefarious activities in the city. We will take them up to the administration.