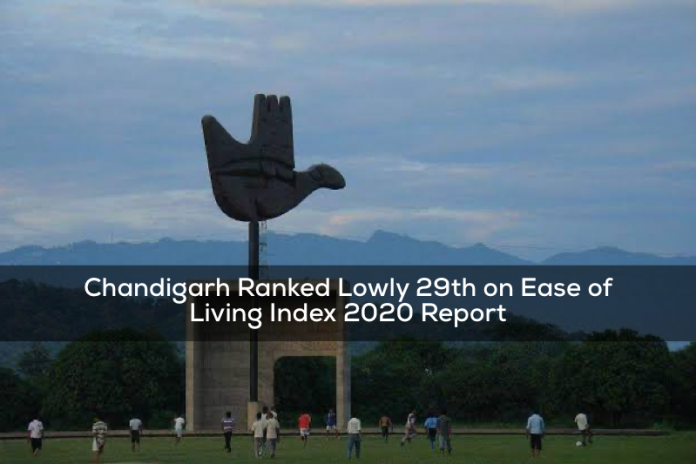 In the recently realised Ease of Living Index 2020, Chandigarh has slipped 24 ranks to be placed at 29th position out of 49 cities with million plus population.

The report has been released by Union ministry of housing and urban affairs. It assesses the quality of life and the impact of various initiatives for urban development.

In 2018, Chandigarh ranked fifth out of 111 cities on composite rankings. For 2020 index, the cities have been divided in two categories:

• Cities with Million plus population

• Cities with less than million population.

In less than million population category, top performers are:

•Economic Ability: Chandigarh got just 9.9 score out of 100 ranking 34 out of 49 cities. On its two sub-categories, Chandigarh got only 7 marks for the level of economic development and 12.99 for economic opportunities.

• Citizen Perception: On this parameter (residents’ view on the services provided by the administration), Chandigarh has scored 72.8 ranking 35 out of 49 cities.

• Education: The only consolation has been first rank on this parameter, scoring 83.27.

• Overall Quality of Life: Chandigarh fared low on this parameter with a score of 54.42 and has been placed on 20th position.

About the Municipal Performance Index:

Newly launched Municipal Performance Index has come as an accompaniment to the ease of living. It seeks to examine local government practice in municipalities across areas of services, finance, policy, technology and governance.