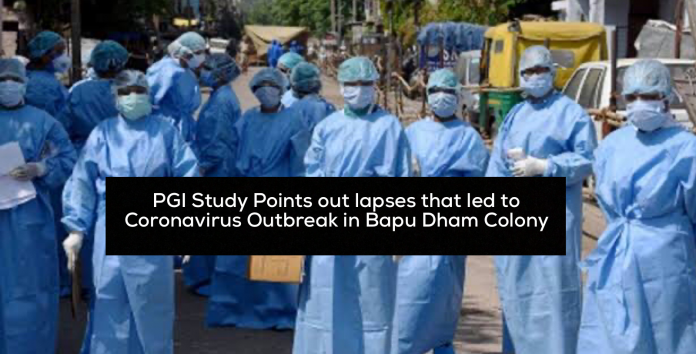 in a recent study by PGIMER Chandigarh researchers published in the Journal of Primary Care & Community Health, it has been maintained that late detection of asymptomatic infections coupled with delayed isolation of coronavirus cases led to widespread outbreak in Bapu Dham Colony in Sector-26, Chandigarh.

The researchers have pointed two plausible reasons behind the outbreak:

“Even though all efforts were made to do contact tracing of the super spreader, these numbers may not reflect the true story as sometimes the patients are not very forthcoming with their history of contact due to stigma associated with quarantine. Another important limitation was that 10 community contacts belonging to 3 families were only screened and not tested by RT-PCR for COVID-19,” read the report.

The first infected case from the locality, 33-year-old man who works as a operation theatre attendant at GMCH-32 has been termed as city’s first ‘superspreader’. He tested positive for COVID-19 on April 24 and till June 1, 222 out of 293 (76%) of the city’s Covid cases had surfaced from Bapu Dham alone and the number of cases in the area touched almost 300-mark even when the strict lockdown was in force.

Researchers have claimed that this case remains the first reported case of documented Covid-19 superspreader with an unusually high number of secondary infections.