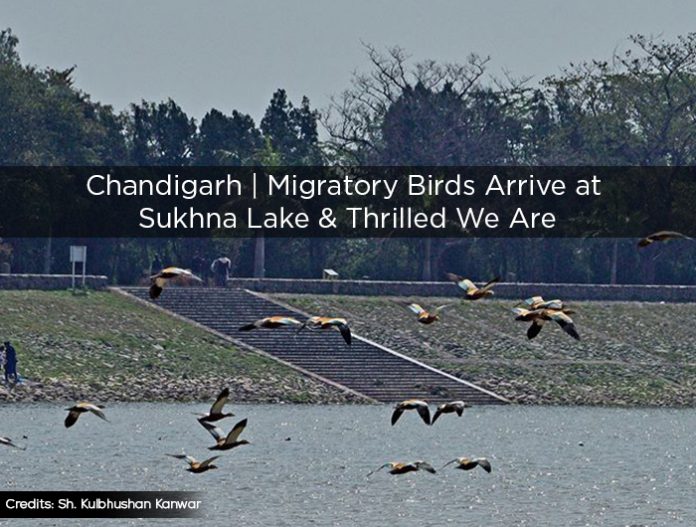 With winter setting in, families of migratory birds have begun flocking. By the last count, six species had arrived at the Sukhna Lake wetland, as notified by Kubhushan Kanwar, an environmentalist. More are expected to arrive, depending on the winter climatic condition.

Sukhna Lake wetland is echoing with loud honking calls of orange-hued distinctive waterfowl, ruddy shelduck. It is also known in India as the Brahminy duck. It comes from Europe and central Asia. The bird can be noticed with its orange-brown body plumage with a paler head. Its tail and the flight feathers in the wings are black, contrasting with the white wing-coverts.

A fourteen day-long migratory bird watching event at the wetland was launched on Monday by Debendra Dalai, Director, Environment Department, Chandigarh administration. According to Dalai, hundreds of winged visitors can be spotted at water bodies in and around the City Beautiful between November and March.

Dalai said that every year Sukhna Lake acts as a home for numerous migratory birds from far-off places, such as Europe, Japan, China, Central Asia, and Siberia.

In collaboration with Yuvsatta, an NGO, around 100 students, eco-club members of Government Girls Model Senior Secondary School, Sector 18 C participated in the event. They also conducted a cleanliness drive and collected around 300 kg of garbage. Coordinator of Yuvsatta, Pramod Sharma, also conducted a quiz. The winners were presented with autobiographies of Mahatma Gandhi.

Migratory birds, like geese, often prefer a rollercoaster ride over the Himalayas – their route closely tracks the contours of the mountains and valleys below – over flying in a straight line? Many studies have said that this likely gives aerodynamic benefits that can make it easier to fly long distances.