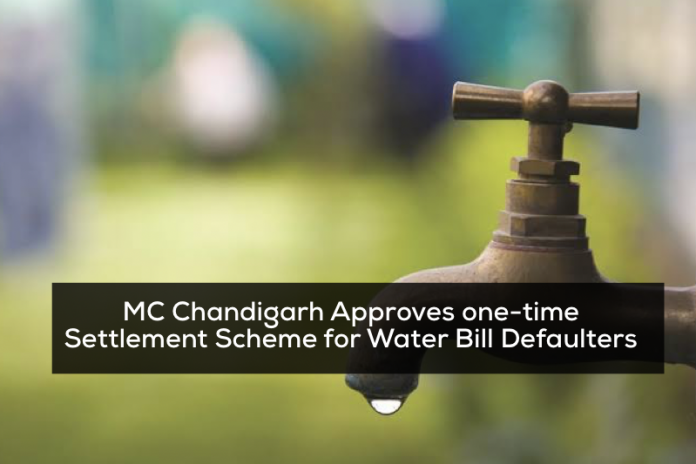 In a bid to clear water bills worth ₹41.60 crore which is pending for several years, the Municipal Corporation, Chandigarh has approved a one-time Settlement Scheme for defaulters in a meeting held on Monday.

Under this scheme, water bill defaulters will get 3 months time to pay their dues.

Rebates will be given

Defaulters who will pay their dues in one installment will get a 10% rebate over full amount & those paying  in two & three installments will get a rebate of 7% & 5% respectively.

According to the MC, around ₹28 crore of the total dues are related to domestic connections, ₹1.7 crore to industrial units and ₹7.29 crore to commercial establishments.

Additionally, it has to recover ₹4.54 crore from different government departments.

The MC will take legal action against those not paying their dues.

MC also approved the display of advertisement on public toilets situated in green belts and parks. Besides this, it gave nod to installation of bank ATMs at various tubewells, boosters and community centres.

The house didn’t decide on a few issues like

Besides this, the issue of regularisation of water connection outside Lal Dora was also not discussed in the meeting.

The meeting ended abruptly following the news of the demise of former President Shri Pranab Mukherjee.

The MC will charge for issuing NOC (No objection certificate) to eateries & schools. NOC charges will range between ₹1,000 – ₹ 5,000. It will be valid for one year & violators will be penalized with an amount 10 times higher than the charges

Applicants involved in manufacturing activities have to attach NOC for getting a license under Food Safety and Standards Act, 2006.

No NOC for government schools

The agenda approved by the House will be sent to the Secretary, Local Government, for final approval.