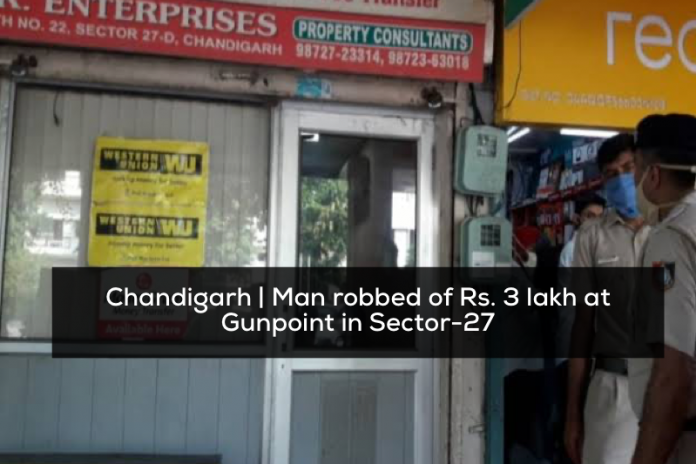 A man was robbed at gunpoint in broad daylight in Sector-27, Chandigarh on Monday afternoon. The robbery happened in Western Union Money Exchange branch, Sector 27, Chandigarh. The miscreants were armed with a gun and axe. The victim, Sanjiv Kumar Kalia, is the owner of SK Enterprises and into the business of currency exchange for a decade.

The victim had returned to his office after withdrawing Rs 2.80 lakh from a bank. He kept the money in a cash drawer in his shop along with Rs. 20,000 already present there and went to a public toilet in the market where his shop is situated. The miscreants were already present in the shop when he came back. Earlier he thought some of his friends were pulling a prank on him but when they started threatening him put a pistol on his head and drew an axe, he realised his mistake. They asked for keys to the drawer. They also threatened to kill him if he (the victim) raised the alert. Thereafter, the robbers asked the victim for a bag following which he handed over to them a laptop bag. They kept the money in the bag and escaped from the spot. According to sources, the robbers had come on a motorcycle that was parked behind a car outside Mr. Kalia’s shop.

Robbers were speaking in Punjabi language, according to Mr. Kalia.

Police have scrutinised the CCTV footage and the robbers are seen walking through the corridor after taking the money.

Face was covered with cloth

According to the victim, one of the miscreants was wearing a cap while the other was wearing a helmet and both had their face covered with cloth.

Police were informed about the incident and reached the spot. Further, a case was registered under sections 392( punishment for robbery) & 34 (act done in furtherance of common intention)  of IPC, 1860. at Sector 26 police station. Further investigations are on, said DSP Charanjit Singh.