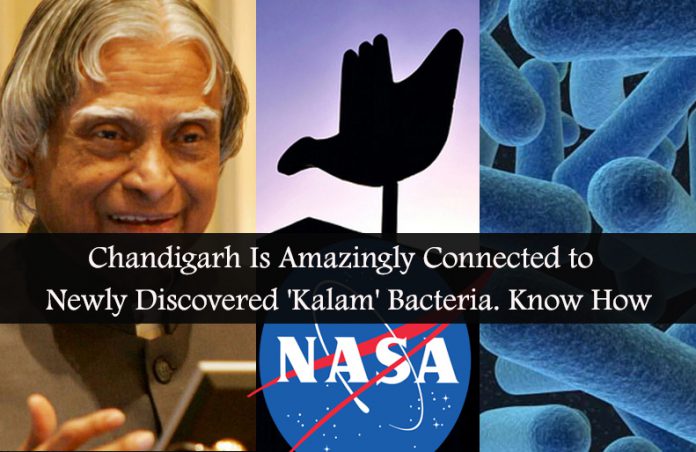 You always have heard IITs, IISc, DRDO and such premier institutions having their names in the acclaimed researches, but Chandigarh has a reason to boast about.

HOW THE BACTERIA WAS DISCOVERED?

The bacteria -Solibacillus kalamii -was isolated from High Efficiency Particulate Air (HEPA) filters (used to revitalize the air and filter out microbes and viruses in International Space Station) in Space Transportation System (STS)-134.

The filter in the International Space station from where Solibacillus kalamii was isolated returned to Earth in May 2011 using STS-134.

“HEPA will be an excellent sample since materials collected over a long period of time will be useful to know what kind of microorganisms were inside the International Space Station, and were breathed in and out by astronauts,” said Kasthuri Venkateswaran, senior research scientist at the California Institute of Technology’s Jet Propulsion Laboratory.

The study was recently published in the International Journal of Systematic and Evolutionary Microbiology.
For special tests and analysis of the microbe, the samples were sent to IMTECH, where analysis was done by a team led by Dr S Mayilraj. “We have this unique facility at IMTECH and we have been doing such tests on microbes isolated from Kennedy Space Center, where the Phoenix spacecraft was assembled.“
WHY WAS IT NAMED AFTER Dr. APJ ABDUL KALAM?
Senior scientist Venkateswaran is a big fan of Dr Kalam. It was his idea to name the bacteria after him.
“Why did we name the bacteria after him? He was a passionate space scientist and ardent supporter of the next generation of educators,” shared Venkateswaran.

Scientists at NASA say that since the bacterium consists of an extraneous layer, it can be utilized in making pharmaceutical compounds. Its resistance to various types of radiation (UV , gamma, etc) will be tested to develop sterilization and cleaning techniques, they say.