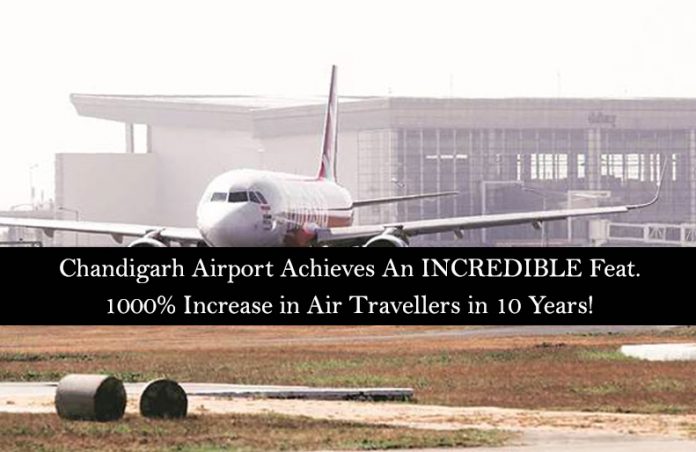 Did you know Chandigarh Airport is 50 years old?

In 1967, Chandigarh airport got its first wings to fly when a civil terminal was opened and connected Chandigarh to Delhi. But, it was least worthy of its name. With rudimentary infrastructure and sub-standard facilities, the airport was catering only to IAF and administrative cargo shipments.

Things continued as business as usual.

A decade forward, the numbers have swelled to whopping 18 lakh now, that’s incredible 1000% growth. Additionally, the number of destinations has also increased from one (Delhi) to 11 domestic and 2 international destinations.

HOW THIS CHANGE CAME AROUND?

New Terminal at Mohali: The major push Chandigarh airport got with the construction of giant terminal in Mohali’s Jheorheri village in October 2015.

2008: From just connected to Delhi, an additional destination of financial capital of India, Mumbai, attracted travellers and flight operators.

2011: Decade-old Chandigarh airport terminal was rejuvenated with modern amenities. Domestic travellers were attracted, but no international flights operated from here, despite being declared a custom airport.

2016: IndiGo and Air India started the much-awaited international flights to Dubai and Sharjah.

“Around 30% to 35% traffic at IGI Airport in New Delhi comes from the Punjab region alone. Any improvement in the Chandigarh airport’s connectivity will have a direct bearing on the Delhi traffic,” said airport official.

♦ Better eateries and other refreshment counters

♦ Shorter connectivity to Chandigarh and Panchkula