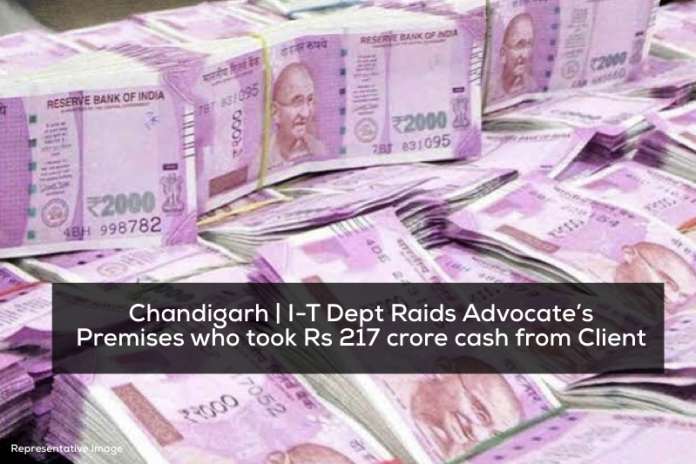 The Income Tax Department has raided a prominent Chandigarh-based advocate on charges of alleged tax evasion and receiving at least Rs 217 crore “in cash”.

Atleast 38 premises linked to the lawyer in Haryana, Delhi & NCR were raided, 10 lockers were restricted and cash amounting to Rs 5.5 crore have been seized.

The Central Board of Direct Taxes (CBDT), that central body that frames policy for the tax department, did not identify the lawyer in its statement, only mentioned that he is practising in the field of commercial arbitration and alternate dispute resolution.

In its statement, it mentioned, “He was suspected to be receiving substantial amounts in cash from his clients to settle their disputes. Incriminating documents of unaccounted cash transactions and investments made by the assessee over several years have been found.”

It is also alleged that the lawyer in one case “had received Rs 117 crore from a client in cash, whereas he had shown only Rs 21 crore in his records, which was received through cheque”.

In another case, he received more than Rs 100 crore in cash from an infrastructure and engineering company for its arbitration proceedings with a public sector company, the CBDT claimed.

“The unaccounted cash received has been invested by the assessee in purchase of residential and commercial properties and in taking over of trusts engaged in running of schools. Evidences recovered indicate investment of more than Rs 100 crore in cash in several properties in posh areas in the last two years,” it said.

The assessee and his associates have also purchased several schools and properties, for which more than Rs 100 crore was “paid in cash”, it said.

The Board said “substantial digital data reflecting unaccounted transactions of the assessee and his associates who are financiers and builders” have been recovered by the search teams.