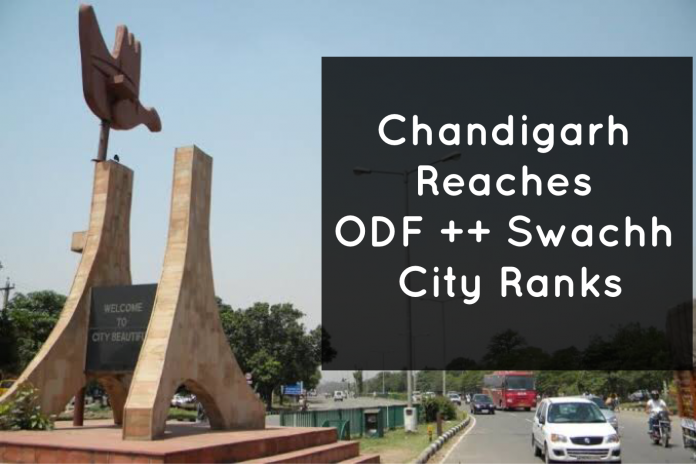 Ministry of Housing and Urban Affairs (MoHUA) has declared Chandigarh as Open Defecation Free Plus Plus (ODF++). This certification was a pre-qualifying condition to compete in the Swachh Survekshan that will be conducted in January 2020. The City Beautiful will now contend with five stars and above rankings in the garbage-free cities.

The aim is to ensure the effective functioning of public and community toilets and to address the proper disposal of fecal sludge.

Earlier, Chandigarh was given the status of ODF in September 2016. Thereafter, it was vying for an upgrade to ODF+ or ODF++.

What does the government protocol say?

Under the Swachh Bharat mission, the MoHUA introduced the ODF++ and ODF+ in August 2019. The fundamentals to get a top ranking in Swachhata Survey 2020 are the two, ODF++ and Garbage-Free City Star Rating-5 certifications.

This protocol states the following:

What was the city’s past status?

The City Beautiful has been participating in Swachh Survekshan since its outset.

Past records reveal the following:

What was the reason for the fall in 2019 ranking?

As per the Convener of City Forum of Residents Welfare Organisations (CFORWO), Vinod Vashisht, the major reason was the absence of door to door collection of segregated waste. Had Chandigarh got a 5-star rating instead of its current 2-star rating, it would have easily figured among the top 5 cities of the country.

Vashisht added that without wasting time, MC should immediately apply for a better star rating from its present 2-star rating. In the next sanitation survey, Chandigarh has every chance to get back to the top 10 cities bracket. Only 4 cities were certified with a 5-star rating. This time, the protocol had been majorly altered.

Baljinder Singh Bittu, Chairman of Federation of Sectors Welfare Association, Chandigarh, said that the ranks should not just be visible on papers, but ground reality as well. To regain the previous status, a lot needed to be done.

Which were the first ODF certified cities?

Till now 244 cities and 586 urban cities are certified ODF++ and ODF+ respectively. These have been selected from among 4372 urban local bodies of the nation.

In September 2016, Mysuru was the first city in India that was declared ODF. For the past three years, Indore is the country’s cleanest city. In November 2018, this became the first ODF++ city.