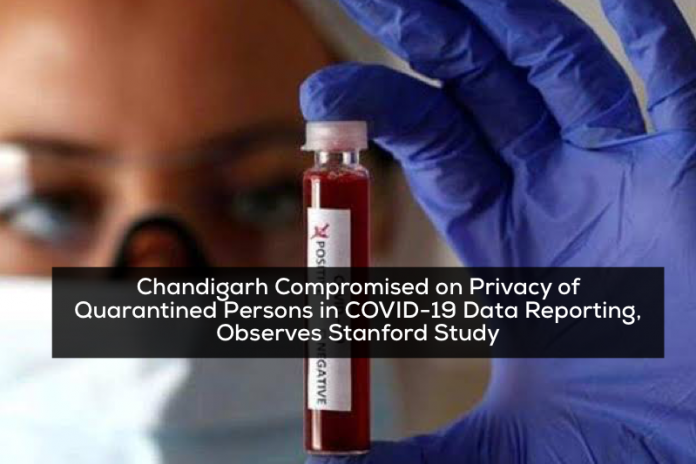 A study by researchers from Stanford University on COVID-19 reporting across India found that Chandigarh and Punjab compromised the privacy of under quarantined individuals by releasing their personality identifiable information on government websites.

The study, which is still to be peer reviewed, was published as a preprint in medRxiv on July 21. It provides for a comprehensive assessment of the quality of COVID-19 data reporting done by Indian states and Union territories governments and found huge disparity in data reporting. The southern states of Karnataka, Kerala, Odisha, Puducherry and Tamil Nadu fare far better in terms of providing comprehensive and accessible data reports to their citizens.

The study took the period between 19th May & 1st June for assessing the quality of COVID-19 reporting in these states. However, it didn’t include states which had less than or equal to 10 Covid-19 patients until May 18. Therefore, states & UTs like Arunachal Pradesh, Mizoram, Manipur, Nagaland, Sikkim and Lakshadweep were excluded from the study.

The team designed a semi-quantitative framework to assess the quality of COVID-19 reporting done by Indian states and UT governments.

Scoring data was curated for all the states by the researchers. Scores were calculated for four categories, namely, accessibility, availability, granularity and privacy. This assessment informs the public health efforts in India and serves as a guideline for pandemic data reporting by other governments.

Accessibility & Availability – How much data related to COVID-19 is available on government websites & to what extent accessible?

Karnataka and Kerala, both have a score of 0.75 under accessibility. Andhra Pradesh scored 0.60 in the availability.

The study found that Punjab and Chandigarh compromised the privacy of individuals under quarantine by releasing their personally identifiable information on the official websites of the administration. Chandigarh scored -0.5 in privacy. According to the study, Chandigarh has at times “released name and residential address of people under home quarantine”.

Punjab has released “name, gender, age, and mobile number of persons inbound to the state from New Delhi on May 10.

States like Kerala, Karnataka, Jharkhand, Madhya Pradesh, Maharashtra have got a score of 0.5.

Granularity score: How much the information is categorised and stratified?

Jharkhand scored the highest in this category with a score of 0.50 and Chandigarh has scored 0.00. The data released by Chandigarh Administration is neither stratified nor categorised on the basis of gender, age and demographic. Additionally, it does not provide daily details of patients in the ICU along with their co-morbidities.

Other states like Andhra Pradesh, Telangana, Goa, Delhi, Bihar, Meghalaya, Himachal Pradesh, Uttar Pradesh too have scored low in this.

As per Indian Express observation, “most recently, on Sunday, the bulletin was further diluted as the separate column containing information on the travel history and contact history of patients was removed.”

• Karnataka’s model is worth emulating. The reasons are:

– The state government releases a health bulletin daily and also maintains a dashboard.

– The information provided on cases is stratified by age, gender and districts and provides graphs showing trends in the state.

– Also the information on the total number of confirmed cases, deaths, recovered, quarantined, and active ICU cases in the state are clearly mentioned.

• Uttar Pradesh and Bihar got a score of 0.0 as they don’t publish any data on their websites.

Instances of Delayed reporting in Chandigarh

The Chandigarh administration releases only one bulletin, instead of a morning and evening bulletin as is released in some other states. Often cases are reported one or two days after the diagnosis. It is more common in cases of diagnosis done after the bulletin in the evening is released. Information related to deaths caused by COVID are revealed a day after the patient passes away.

Recently, a 57-year-old man from Sector 19 had tested positive on July 2, but his name was added in the daily bulletin after a gap of six days, i.e. on 8th July. In another instance, a PGIMER nurse tested positive for the disease on July 4, but her name was included on 6th July.

As reported in Indian Express, there are two cases where deaths were reported the next day.