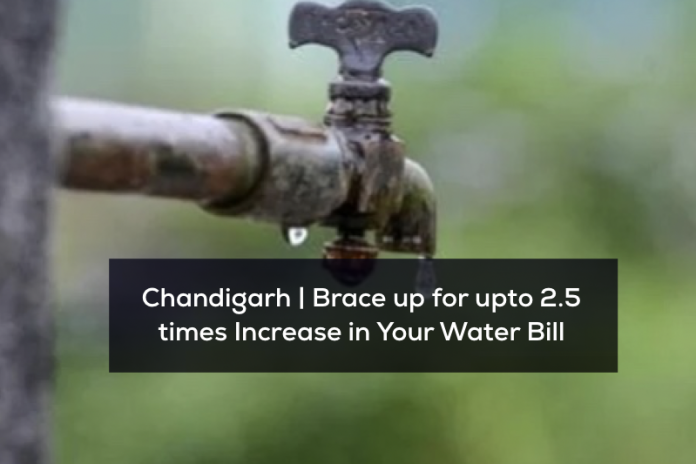 UT Chandigarh administration has issued a notification to increase water tariff which will be effective from April onwards. It will cause 1.5 to 2.5 times hike in your existing water bill. The increase in water tariff was put on hold last year till March 2022 citing Covid-19.

To stop increase of water tariff was the poll promise of every political party in civic poll, but clearly it has fallen flat.

Communiqué from the Administration said

To justify the hike in the rates, a communiqué from the Administration read, “It must be noted that the water tariff was not revised for the past 10 years i.e. since May 24, 2011. The cost of water supply and additional infrastructure has increased manifold since then, leading to continuous losses to the Municipal Corporation. In spite of the present notified rates, there are still losses of over Rs 80 crore in the water supply and sewerage sectors.” It also stated, “The rates in the first two slabs are comparable or even lower than those in Punjab and Haryana. The water tariff in the higher categories in Chandigarh is much lower than Delhi i.e. Rs10/kl and Rs20/kl vis-à-vis Rs43.93/kl. The sewerage cess in Chandigarh is 30 per cent of the water volumetric charges and is much lower than Delhi, which is 60 per cent.”

However, the revision of rates does not seem to have gone down well with residents and the opposition who have expressed their displeasure on the decision calling it “unnecessary hike” and “detracting on poll promises”.