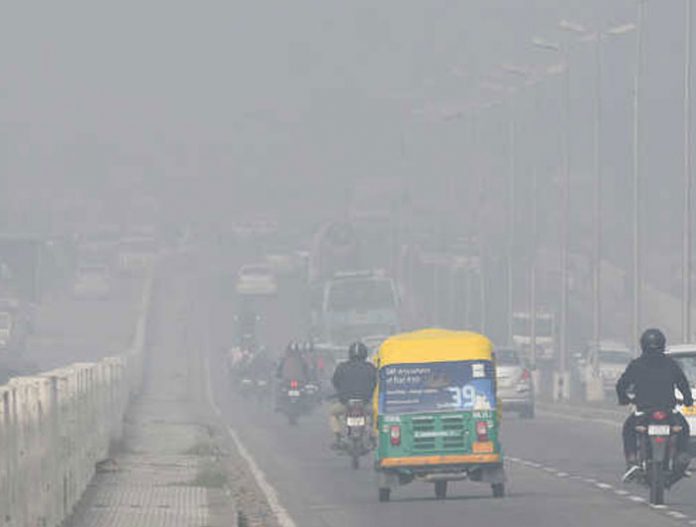 Chandigarh or city beautiful is facing a not-so-pretty condition these days. The city is seeing smoggy conditions for the first time in last few years. The air quality in the city has worsened. Even the visibility conditions in the city had dropped considerably – from 1500 meters to merely a 1000 meters.

The respirable suspended particulate matter (RSPM) levels were three times more than the allowed limit. Such conditions would create problems for people with respiratory problems. Already there are increasing number of patients complaining respiratory, skin and eye irritation at various clinics and hospitals in Chandigarh.

On Wednesday, the Chandigarh Pollution Control Committee reported that the air quality had nosedived. Data on the AQI(Air quality index) was collected from the active locations in the tricity.

What Caused The Smog? Not one, but two reasons

Burning of stubble and the prevalent weather conditions, both contributed in the development of smoggy conditions.

“During first few days of this month, easterly winds were blowing and they picked moisture from Bay of Bengal. Since the temperature was low in northern region, the moisture in the air got condensed and formed fog,” explains Surinder Paul, director, Meteorological Centre, Chandigarh.

Chandigarh Pollution Control Committee, member secretary, P J S Dadwal, said that the dry, cold weather and the low wind velocity has intensified the present situation. One can only wonder about the plight of the tricity residents.

There has been a small increase in the night temperatures as well.

Last year, the western disturbances had improved the situation as the winds were dry and moderate.

NASA Captures the gravity of the situation in satellite images

Even the NASA released satellite pictures of the deplorable condition of air quality in North India.

Respite In Sight As Smog Will Recede

Slight relief is expected in the tricity by next week. Surinder Paul, director, Meteorological Centre, Chandigarh, said,”There is one western disturbance approaching from November 11 and then there is a possibility of improvement. If there is rainfall, there will be a change in the present conditions.”

He further added,”The situation will begin improving from Friday. There are chances of rain in the tricity on November 13 and 14 due to the western disturbance.”

Source: The Indian Express, Times of India, The Tribune, NASA