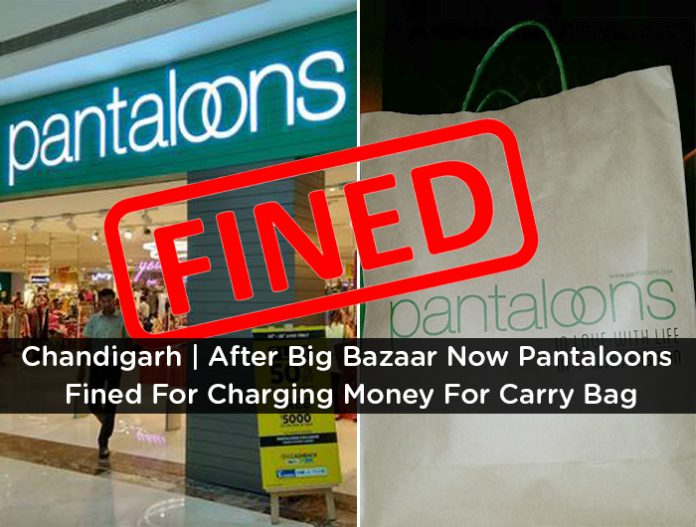 In an appalling case, the district consumer disputes redressal forum has penalized Pantaloons, a retail store at Industrial Area, Chandigarh, for wrongly charging for a carry bag. It has been asked to deposit ₹2,000 and refund the amount of ₹5 and ₹7 to the complainant.

Nitin Gupta, a resident of Chandigarh, alleged he bought some products worth ₹484 from the multi-brand retail store on December 27, 2018. At the billing counter, he was charged ₹5 for a carry bag to carry the articles purchased. Though, Gupta did not intend to purchase it. Thereafter, he went to Pantaloons store again on April 20, 2019, and purchased items for ₹4,004. This time they charged ₹7 for the carry bag.

The store contested Gupta’s claim, stating that the amount was “rightly charged” for the carry bags. It was mentioned the man had consented to be its purchase for an additional charge.

As per the judgment, if somebody learned a lesson then a lenient view was taken qua that person. Therefore, taking a lenient view here, they deemed it proper not to impose any punitive costs on the Opposite Party (Pantaloons).

The firm was directed to refund ₹5 and ₹7 wrongly charged from Gupta, ₹500 compensation and ₹500 as litigation expenses.

Court’s Judgment As On April 9

The court stated through newspapers that firstly, charging for a paper bag and secondly, putting its logo on the same is a clear cut unfair trade practice on the part of the appellant/opposite party.

This is not the first instance when Chandigarh Consumers Forum has fined stores and brands for charging for carrying bags.

Other such cases are as follows:

The multi-brand chain was fined ₹43,000 in four different cases. These were filed by Sarita Kumari and Bharat Dawar of Sector 34 seperately, Gurpreet Singh of Sector 46 and Baldev Raj, a resident of Panchkula. The store officials rubbished the allegations in its plea against the forum’s decisions. The forum, however, rejected Big Bazaar’s plea saying it was not only carelessness but a deficiency in service.

The Chandigarh consumer forum directed the store to pay ₹9,000 to a consumer for deficiency in services. As per the orders, it was Bata’s duty to provide a free bag to the customer. Thus, the international chain has been directed to provide free paper bags to its customers.

Located in Elante Mall, Lifestyle has been fined ₹11,500 for charging a customer ₹10 for a carry bag. The consumer forum has directed the store to also refund the cost of the bag to complainant Ketan Chopra, a resident of Sector 40, Chandigarh.

This sure is a lesson for retail owners who charge people money for bags and think they will get away with it. If you too have been cheated, you must file a complaint at the consumer forum to seek remedy.