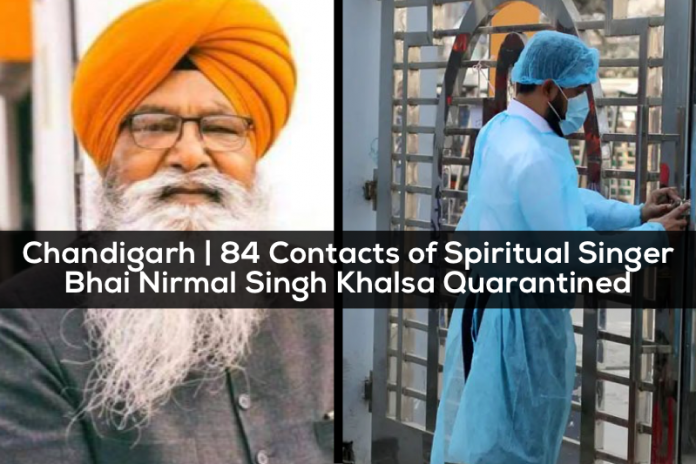 The recent demise of Padma Shree recipient, former Hazoori Ragi at Golden Temple, Bhai Nirmal Singh Khalsa, has alerted the Punjab and Chandigarh administration. He had tested positive of COVID-19 on Wednesday.

Chandigarh Municipal Corporation’s (MCC) contact tracing team yesterday quarantined 84 people. They attended a kirtan where Bhai Nirmal Singh Khalsa was was present. It was held on March 19 at a house in Sector 27, Chandigarh.

According to the neighbours, the raagi was called for the religious gathering to be held to mark the beginning of a series of pre-wedding functions. As a result, the house would be jam-packed with people and the roads were blocked by vehicles.

Another woman residing close to their house called up the police to inform about the recently held wedding after the news of the raagi’s death spread all over the region. She said that a former judicial authority also living close-by had recommended to delay the marriage ceremony. But, this couldn’t be made possible as the owner’s children had come from abroad.

The house owner, where the functions were held, owns a banquet hall in Mohali. He’s also an office bearer of the Association of Banquet Halls, Mohali.

Padma Shri awardee Bhai Nirmal Singh was undergoing treatment for coronavirus in Amritsar. He died early on the morning of Thursday, 2 April, taking the COVID-19 related death toll to five in Punjab.

As per a senior MC official, of the total 84 contacts quarantined, 14 members reside in the same house in Sector 27. Others belong to namely Sectors 18, 33, and 36. In Sector 27-A, four residences have been quarantined.

The Chandigarh administration had been informed about the religious gathering by the Amritsar health authorities to take necessary steps in this regard.