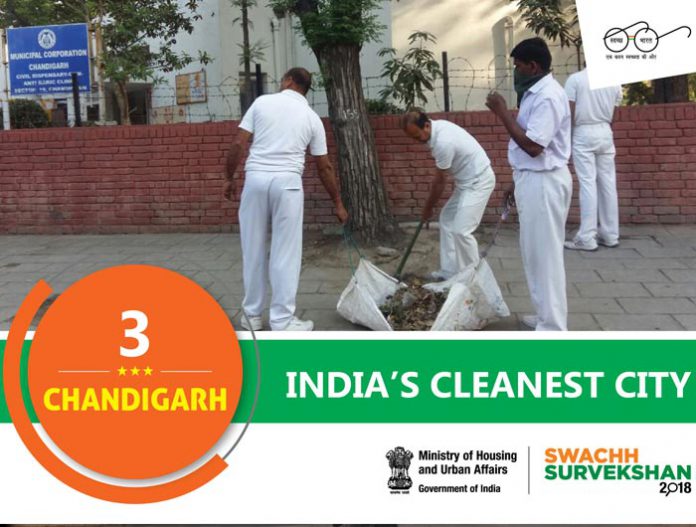 Swachh Survekshan 2018, surveyed 4,203 cities from January 4 to March 10, 2018. Indore retained the first rank so does Bhopal at second spot. Chandigarh jumped from 11th last year to third position in the survey.

The cities were assessed and given marks on three main segments:

It was found that in 2017, Chandigarh had lagged in the public feedback segment drawing huge criticism. As a result, the civic body this time put optimum efforts in this segment by engaging employees of the MC irrespective of the fact they were working in which department.

“The MC managed to connect with around 36,000 people with the Swachhta app and used other multiple feedback means like advertisements and interactions with public, residents welfare associations and markets welfare associations. Special teams visited colleges and educational institutes to engage youth to download the Swachhta app. All this worked for us,” said an official of the MC.

Evidently happy MC Mayor Davesh Moudgil, thanking Chandigarh residents, reportedly said, “It is a matter of pride not only for me but for all residents of Chandigarh. With our joint efforts, Chandigarh has jumped from 11th to 3rd position in the Swachhta Survekshan-2018.”

Other highlights of the Swachh Survekshan 2018: