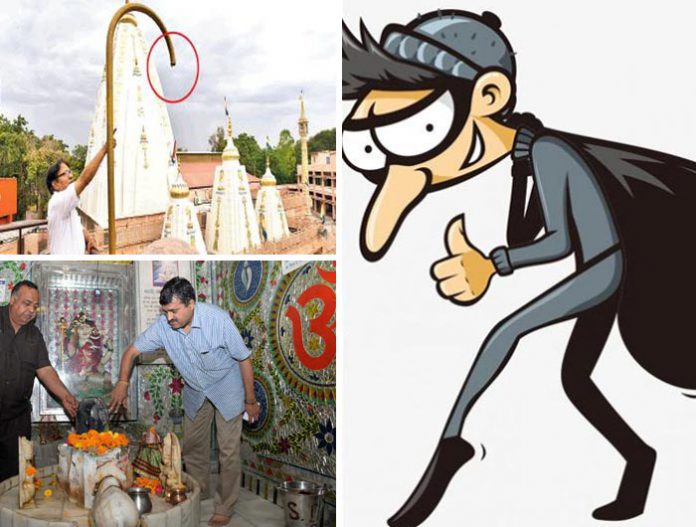 Just on Wednesday, a news of theft in Sector 19 Sita Ram temple had come to light. Now, on the intervening night of Tuesday and Wednesday, two more temples, both in Sector 27 Chandigarh, were robbed.

The thieves fled away with deity ornaments from Sanatan Dharam temple and Jain temple in Sector 27.

According to police, the two thefts were carried out within an hour by 3 men. The two temples are at a closes distance from each other. The CCTV footage shows the thieves entering the Sanatan Dharam temple at 1.30 am and leaving the Jain temple around 2.30 am.

The thieves took away a chattar (umbrella structure) – weighing around 10 kg – from the 10-foot Bahubali statue at the Jain temple and 5 silver mukuts (crowns), 1 chattar from the Shiv idol from the Sanatan Dharam temple.

There have been 6 cases of thefts in temples in tricity and all cases remain unsolved to this day. Earlier this week, 2 thieves took away ornaments worth Rs 20,000 from Sector 19 Sita Ram Temple. It was only due to smartness of the priests who had kept the original ornaments worth Rs 2 lakh safely and had adorned fake jewellery on the idols that minimized the loss.

The UT Deputy Superintendent of Police, Satish Kumar has reportedly hinted a link in all six cases of thefts. “The modus operandi is similar to other thefts that have taken place in the city. The burglars conducted a recce before committing the crimes. They knew the location of the CCTV cameras. They first changed the position of cameras on entering the temple.”

Even it is suspected the same gang is behind all thefts.