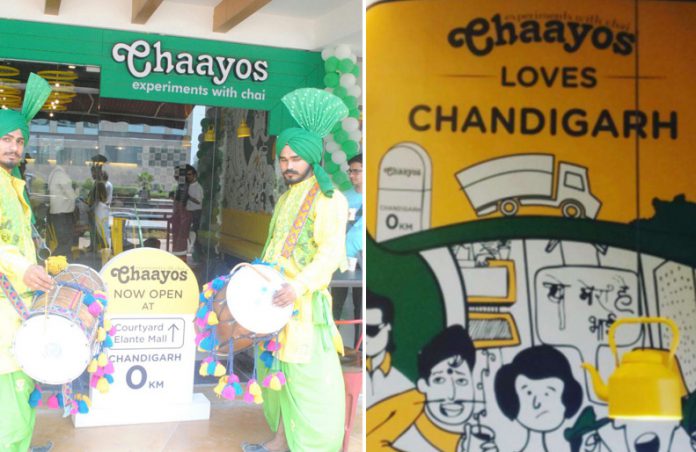 The café that has given every Indian to live her/his ever brewing love for chai all new flavors and aroma, CHAAYOS, is in Chandigarh now. After mesmerising NCR, Mumbai, Chaayos has opened its maiden outlet in Chandigarh in the iconic Elanté Mall’s ground floor.

The café has over  12,000 combinations of chai and plethora of mouthwatering dishes. It is surely going to rank one in our list of favourite hangout spots. Whether it is a social gathering with buddies or family get-together or business meeting or you need a place to sip your chai with your favorite novel in hand, Chaayos with its Indian rustic look and design is the perfect place for everyone and everything.

[ngg_images source=”galleries” container_ids=”31″ display_type=”photocrati-nextgen_basic_slideshow” gallery_width=”792″ gallery_height=”514″ cycle_effect=”shuffle” cycle_interval=”1″ show_thumbnail_link=”1″ thumbnail_link_text=”[Show thumbnails]” order_by=”sortorder” order_direction=”ASC” returns=”included” maximum_entity_count=”500″]The best thing that outstands Chaayos from other cafés is that you can get your chai customised in endless flavours, letting you experiment with your chai to have your own ‘Meri Wali Chai’. From traditional desi-chai to Kangra tea to unique aam-papad and harimirch-chai, you can have it all under one roof, that too in an impeccable taste.

The story of Chaayos is equally mouth-watering and inspiring. Two IITians leave their posh jobs in US and come back to India to become entrepreneur!

The Founders of Chaayos 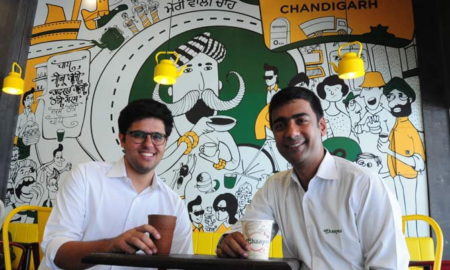 Nitin Saluja, IIT Bombay graduate, and Raghav Verma, IIT Delhi graduate, what became stronger than their friendship was their crazy love for chai and four years ago, started Chaayos, with Zishaan Hayath as its angel investor.

Speaking at the launch, Nitin Saluja, Founder Chaayos said,”Being an entrepreneur I believe in dreaming and turning it into reality. Chanḍigaṛh is an example of how modern India should be built and an overwhelming response from the people of Chandigarh has strengthened our belief about a place like Chaayos in new India. We want to set an example by being a part of this wonderful city. We know Chandigarh loves chai, this is our first outlet in the city and we will be adding more outlets in the next 12 months.”

Talking about the launch Raghav Verma, Co-Founder, Chaayos said, “We are extremely excited to inaugurate Chaayos Chandigarh. As chai lovers, Nitin and I understood the pain of not finding the perfect chai in coffee shops which is how Chaayos came into being. There’s a chai for everyone here and we are sure the chai fans in Chandigarh will love Chaayos as much as Delhi and Mumbai do.”

Chandigarh, you don’t need a reason to have your chai. Just go there, take your friends, family, colleagues, business associates, anyone and everyone over a cup of tea. Or even better, just you and your signature chai!