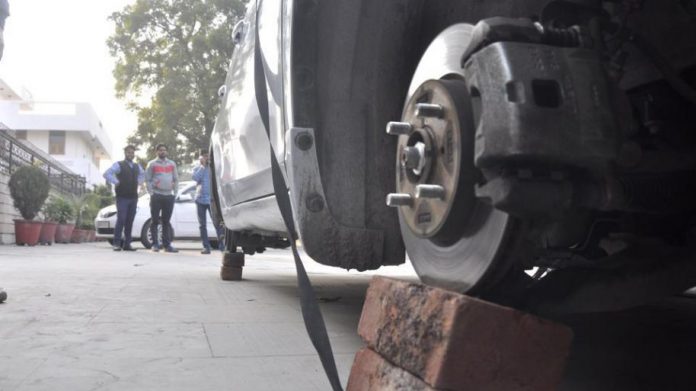 If you happen to park your car or two-wheeler on the road, then you need to pep up the security system for it. Chandigarh is witnessing an increase in car tyres and accessories theft with on an average one such case in every two days reported since January 1, 2017. 40 such complaints have been reported and 10 cases in the past two weeks reported are cases of theft of wheels from cars parked right outside houses.

Police said vehicles targeted are new, considering the re-sale value of the tyres and alloys in the second-hand market. A normal jack and bricks are used to uplift four-wheelers.

“As parking spaces are shirking the residents are forced to park vehicles wherever they find space thus compromising with the security of the vehicle. The police are carrying out night patrolling. The residents need to install CCTV cameras and localities need to hire watchmen who can keep surveillance,” added Eish Singhal, SSP Chandigarh.

ADVISORY ON KEEPING YOUR WHEELS SAFE

April 6 – A resident of Sector-45 Sushil Mehta reported all 4 tyres of his Swift vehicle stolen.

April 3 – Arun Kumar Verma, resident of Sector 46, Chandigarh reported the theft of all four tyres of his Grand i-10 car.

March 29 – All wheels of a Toyota Fortuner, parked in Sector 33, were stolen.

Don’t make your car tyres or accessories an easy steal. Pay heed to the advisory!