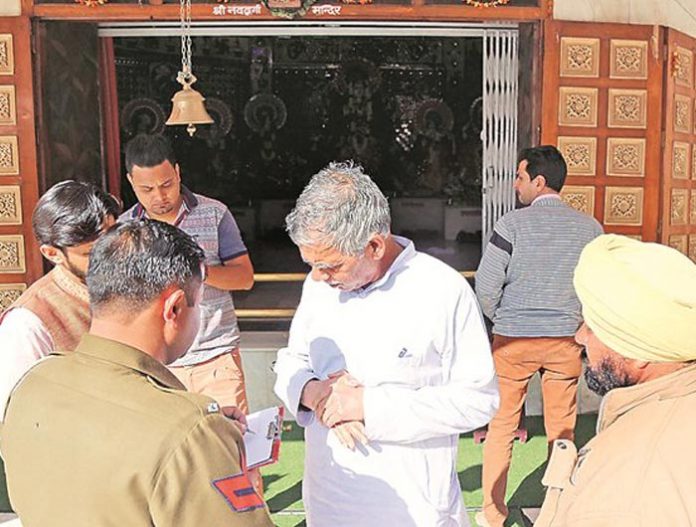 During the wee hours of Monday, 6 men plundered the Shiv temple complex in Mahadevpur, Saketri and took away gold and silver jewellery adorning idols worth Rs 30 lakh.

It was only when the temple priest went for morning prayers at 4 am that the robbery came to light. He found out found the doors of six temples — two of Shiva, one of Durga, one each of Ram, Hanuman and Krishan, open and jewellery adorning the idols missing. The stolen items included 16 silver crowns, 12 silver “chhatra”, one gold crown, one silver flute from Krishan’s idol, eight gold nose rings, three silver articles and nine gold jewellery. The accused did not steal cash lying in the donation box.

The CCTV camera shows the six thieves, all of them in white clothes and with mufflers covering their faces, standing in front of the six temples around 1.57 am. One of the accused was wearing a cap and holding a wooden stick in his hands. The accused broke the latches with a small cutter. They did not enter the temple premises from the main entry and jumped into the compound from one of its sides.

The temple has a total of 32 CCTV cameras. When the thieves struck, 11 people, including seven priests, two security guards and two gaushala caretakers, were inside the temple.

The temple runs under the Shiv Mandir Navdurga Charitable Trust.
The police is investigating various angles and in not ruling out the involvement of an insider.
Source: The Tribune, The Indian Express
Image Credits: The Indian Express
Share on Facebook Share
0
Share on TwitterTweet
0
Send email Mail
0
Total Shares