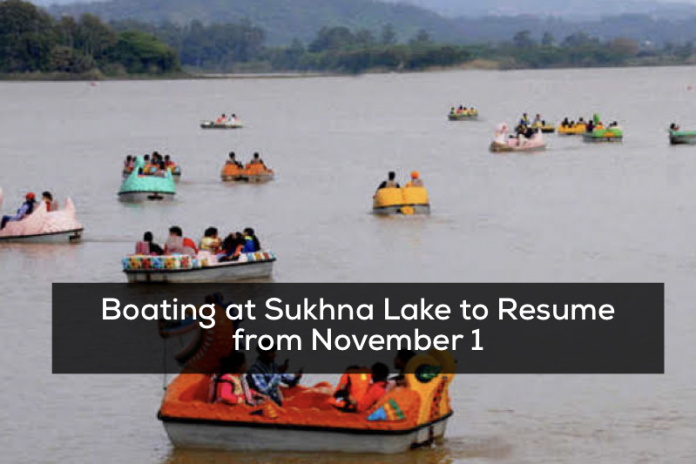 UT Chandigarh administration has decided to open boating at Sukhna Lake from November 1. Chandigarh Industrial and Tourism Development Corporation (Citco) had recently submitted a proposal to the UTadministration on the same.

Entertainment parks have been allowed to operate in recent Unlock guidelines provided social distancing and sanitisation protocols are adhered to.

While last year Rs 6.5 crore in profit was earned from boating at Sukhna Lake alone, this time mounting losses have been worrisome for the administration. Citco is already reeling under financial crisis and with boating suspended since March 18, revenue of Rs 50 lakh every month is lost by the UT administration.

As per the Standard Operating Procedures (SOPs) issued by the government, the boats will be operated with 50% capacity and on four-seater boats, only two people will be allowed.

The administration has also paced up the process to introduce much-awaited city’s first 80-seater battery/solar operated party boat at Sukhna. Recently, a tender was floated to engage an agency to run the boat.

• The agency will responsible to provide a brand new party boat with terrace.

• The boat will be eco-friendly and have lighting arrangement for operations during night.

• The agency should ensure it does not pollute Sukhna and noise is maintained within the permissible limit as prescribed in the notification of department of environment, UT administration dated January 19, 2015.

• The boat can be used for conducting small party or for other occasions, for which a lump sum amount can be fixed by the agency for one/two hours.

• Expenses for the decoration will be borne by the guest. However, arrangements will be made through officials authorized by Citco from amongst the firms on the panel. Eatables will be supplied by the Citco only. However, cleaning of boat will be the responsibility of the agency.

• The timings for ferrying party boat will be as fixed by Lakeview authorities.