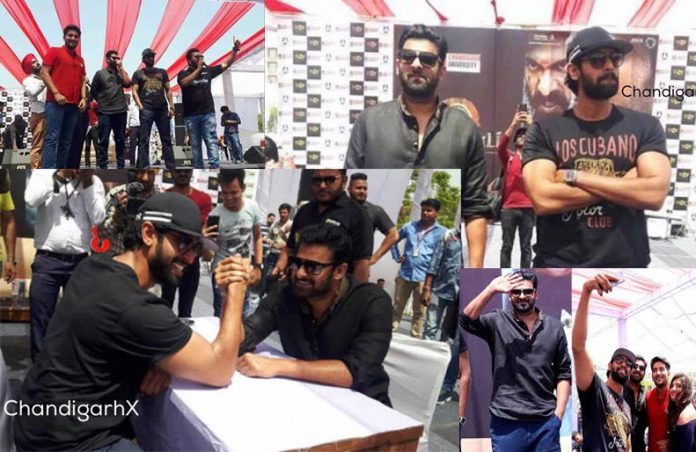 The movie that has hooked the nation for past years is finally going to release on April 28, 2017 and Chandigarh had a unexpectedly super pleasant surprise to feast on.

The Bahubali and Bhallala Dev themselves visited the City Beautiful to become part of Baisakhi celebrations. The rocking duo, Prabhas and Rana visited Chandigarh University and made the crowd go nuts. This was the first ever City visit of the team for the movie promotions.

Both got a shudh desi swag reception on Chandigarh University escorted by Bhangra and and dhol beats. Both had some amazing things up their sleeves for the crowd too. They engaged in some fun game of fist fight, interacted with students and beyond doubts, ‘Katappa ne Bahubali ko kyun maara’ was one question on everyone’s lips there.

Some Students were seen doing push-ups.

Prabhas shares, “Celebrating the festival of Baisakhi in Chandigarh has been a joyous experience for us. It was interesting to interact with young minds at the University and soak in the vibe of the festival in the city”.