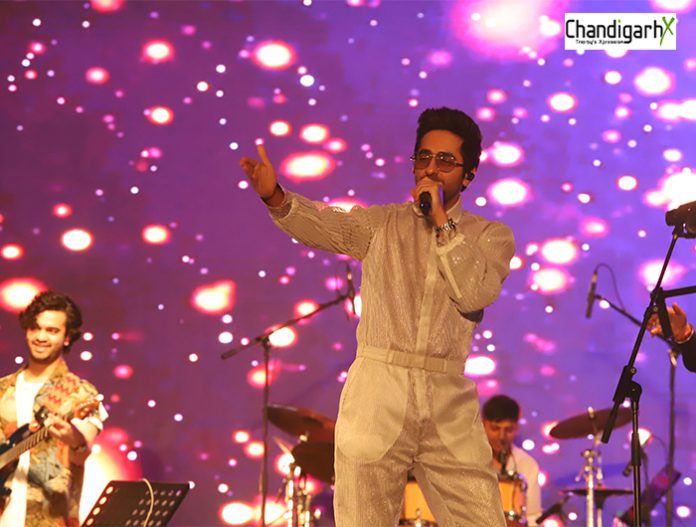 Under the moonlit sky, dressed in a glittery white jumpsuit, when Elante Mall’s ‘Happyness Ambassador’ and city’s local lad, actor Ayushmann Khurrana went on stage at the courtyard of the mall on Saturday night, the audience had gone all wild. The screaming and cheering were followed by his melodious chartbusters one after another. The prolific entertainer set the stage on fire with foot-tapping songs like ‘Sadi Gali Aaja’ and a rendition of ‘Bhangra Tan Sajda’ which went on to be “Jad nachda tricity.”

Band Ayushman Bhava performed in front of his home crowd for the first time. As Ayushmann belted out his songs, the audience was left mesmerized.

The musical extravaganza started with singers like Mankirat Aulakh before Ayushmann took the stage. The singer performed all his famous songs including Badnaam, Kadar, Bus Kar, Gala Mithiyan and others to a grooving crowd.

The venue of ‘The Happyness Fest’ was the huge Courtyard at Elante Mall decorated with a canopy of multicolour carnival flags, festive adornments, a life-sized donut selfie point, food stalls, and elaborate fountains. The mood throughout the day was one of a gigantic party as more and more people arrived even after heavy rain and consequent delay in beginning the event. They were all in high spirits.

Ayushmann’s father P Khurrana, brother Aparshakti, other members of the family and school-college friends also turned out. When the two brothers sang ‘Rum rum rum whiskey’, their father was all whistling and cheering.

Speaking on the occasion, the actor-singer said that coming back to his hometown was always special. He was excited to be performing in front of the people of Chandigarh to whom he owes his successful journey to date. Moreover, he lauded the high energy levels of the audience who sang along beautifully. The actor performed on ‘Pani Da Rang’, ‘Moh Moh Ke Dhaage’, ‘Haareya’, ‘Nazm Nazm’ and ‘Ghazab Ho Gaya’, pleasing them to the fullest.

Dedicating to his home, Chandigarh, the actor was teary-eyed while he belted out ‘Mitti Di Khushbu’.

Some of his biggest hits in Bollywood include Vicky Donor, Badhai Ho, and most recently Shubh Mangal Zyada Saavdhan. Ayushmann is also widely appreciated for his chartbusters like ‘Ik Vaari’, ‘Mitti Di Khushboo’, ‘Yahin Hoon Main’ and many more soul-touching numbers.