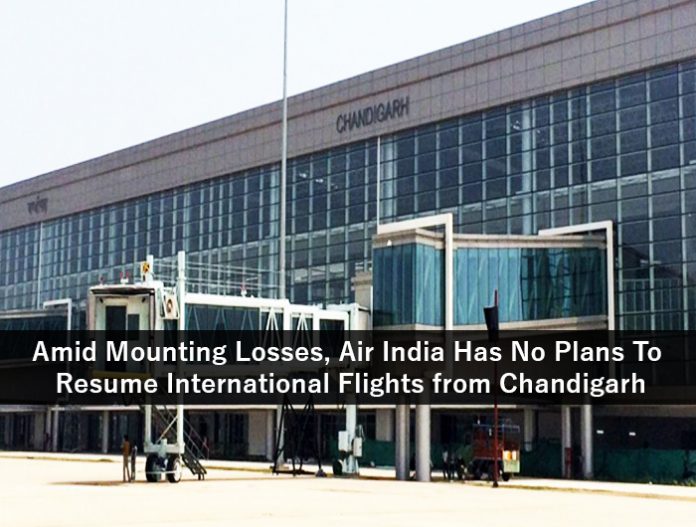 Owing to its disinvestment procedure, Air India suspended its direct flight from Chandigarh to Bangkok last year. As per the latest announcement on Thursday, the airline stated that it has no plans to resume services on this route. Moreover, no new international flights from Chandigarh International Airport will be introduced.

According to Rambabu Ch, Air India’s General Manager (Commercial) Market Planning, earlier they had NOTAM issues but that is no more the case. The flight between Chandigarh and Bangkok was not making revenue.

He added that The City Beautiful has high potential but they could revisit once post completion of the disinvestment procedure. This is likely to take place by July-August next year.

Following the suspension of the direct international flight, Air India reconstructed its schedule on the Chandigarh-Delhi route. Now, passengers from Chandigarh can connect with twenty-five destinations in Europe via NCR. There is an introduction to a new morning flight to the national capital as well.

There was no competition in the sector during the time Air India had been introduced. The airline could have monopolized the route. However, it showed its inability to resume the direct flight because of its existing financial crisis. In 2018 in a Public Interest Litigation, Punjab and Haryana High Court was monitoring the up-gradation of facilities at the airport. In this regard, Air India brought to light the loss incurred by Chandigarh-Bangkok flight.

Beginning in December 2017, the figures are as follows:

Air India mentioned in the court that closure of the direct flight was on account of the disinvestment procedure. The tender had been invited searching for buyers of the airline. But nobody turned up. Subsequently, a review plan was created to minimise losses. To curtail operational losses, Air India had stopped Boeing 787 from London to Newark in November 2018. Thus, the court did not push for resumption.