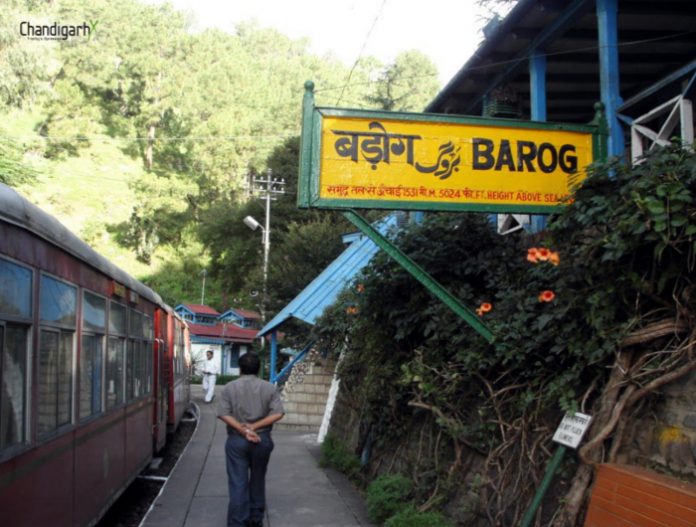 The train journey is the perfect time to relive old memories. A million stories come alive inside railway coaches and at the stations. The endless times food is
served is sometimes even more than the hours of the journey. But still, one manages to gorge on lunch boxes of co-passengers. Railway becomes a point where people come together. Even though not popular tourist destinations, some real stories can be heard hidden in quaint towns of Himachal. Barog is one such hill station you should consider rediscovering.

What’s The Story Behind Barog’s Tunnel No 33

The Kalka-Shimla narrow gauge line is a UNESCO World Heritage Site. It is also the longest straight tunnel in this railway, 1143.61m. ‘Tunnel no 33’ is located near the picturesque station of Barog in Himachal Pradesh’s Solan district. History says Colonel Barog, an engineer during the British era was assigned the work of tunnel no 33. In order to complete construction before time, he divided his team members. They were orederd to begin drilling from opposite ends. According to him, both the ends would meet to complete the tunnel. But, it so did not happen. Later, it was discovered that due to his miscalculation, the tunnel could not be completed. The government fined him with one rupee for wasting resources. This left the colonel depressed. Once, he went for a walk with his dog near the tunnel. Daunted by shame, he shot himself with a revolver.

As per locals, the dog, scared to death, ran to a nearby village for help. But by the time, the villagers reached the colonel was dead. The work was later assigned to chief engineer HS Harrington. But, he too couldn’t make the two ends meet. Then he had to take help of Baba Bhalku. He was a mystic from Chail in Himachal Pradesh. It was he who showed them the correct course to drill. Finally, the tunnel was completed in 1903. The people of Barog and around believed that Baba Bhalku possessed natural engineering skills. If it hadn’t been him, the tunnel wouldn’t have been completed. There is a museum in Shimla after his name to commemorate his contribution to the Kalka-Shimla Railway.

Barog is just 60 km from Chandigarh on the Kalka-Shimla highway. If you wish to travel by train, it is a complete 4-hour journey. First, you’ll have to take a train from Chandigarh to Kalka and then the Toy Train will take you to Barog. When travelling by road, it is a 2-hour long drive.