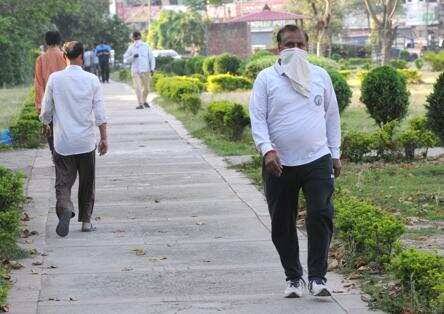 Despite curfew orders in the wake of the COVID-19 novel coronavirus, the police on Monday rounded up 466 people while on their morning walk. They were businessmen, advocates, Punjab and Haryana bureaucrats and IT professionals.
150 were arrested for non-compliance of lockdown norms. 32 others were arrested for not wearing masks outdoors and 18 FIRs registered.

As per the Indian Penal Code, Section 188 states disobedience of order promulgated by a public servant. Under this, an individual can be fined up to Rs 1,000 and be imposed for up to 6 months.

A senior police official said that the bureaucrats were let off with a warning. Senior citizens cited health problems as the reason to not miss their daily walk.

City’s 120 parks, including 40 in the central sub-division, 35 in the east and 45 in the south sub-divisions were checked. According to SSP Nilambari Jagadale, this exercise will continue during morning and evening times until people adhere to the instructions. Anybody found on a walk would be booked immediately. It was imperative to break the chain of infection spread.

Maximum arrests were made at the following police stations:

The Sarangpur people arrested a majority of the residents from colonies. As per reports in the Hindustan Times, even after repeated warnings, they were going for walks early in the morning.

Among the arrests were the following:

Out of the 32 arrested for not wearing masks, 14 persons were from the east sub-division in 13 cases. 11 persons were registered in the centre in 2 cases and 7 persons in the south in 3 cases.