Home Latest News Chandigarh & Around 189 Traffic Challans Pending Against Biker In Chandigarh, Many Issued Before He...
Facebook
Twitter
WhatsApp
Email 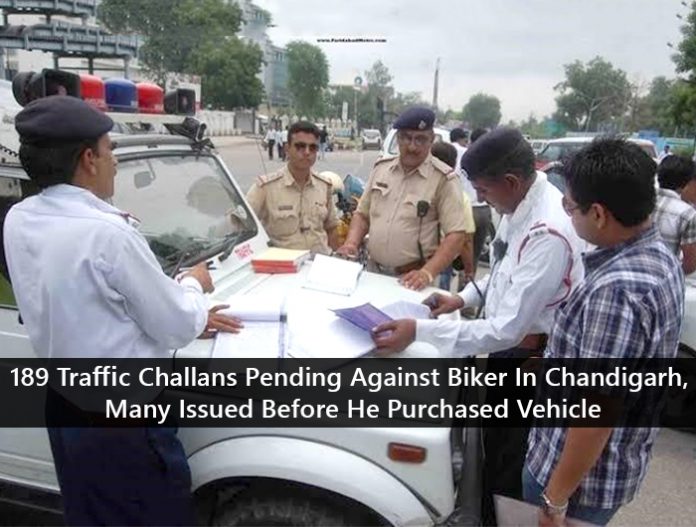 In a shocking incident, city-based 21-year-old youth has been identified to have 189 challans pending against him. Accumulated between 2017 and 2019, the challans have been issued for various offences via Traffic Violation Information Slip (TVIS).

Uninformed of a single challan

The serial traffic violator is identified as Sanju. He claims of being unaware of a single challan, but the latest being issued on July 26 for taking a wrong U-turn. He was charged a penalty of ₹300. But, when the challan reached the Chandigarh district court, records revealed that 189 challans are pending against this person’s bike.

As per Sanju, he never got any information about 189 challans pending against him. He had been alert while driving, and more so post the new regulations. What surprised him more were the number of challans, as he had purchased his motorcycle only about one-and-half years ago.

TVIS challans are issued based on violations caught on CCTVs or pictures clicked by the public. Thereafter, they are shared with the police and are sent to the vehicle owner’s registered address. They are also referred to as e-challans.

In July, a 23-year-old milkman came to know that he has been challaned thirty-six times in seven months. Issued from December 2018 to June 2019, TVIS never reached him due to a change in address. All the offences were for riding without a helmet. They were captured by the same CCTV camera.

Now, police have started sending reminders through text messages about pending TVIS. According to Shashank Anand, Senior Superintendent of Police (SSP, Traffic), the vehicle will be impounded in case somebody fails to pay challan even after three reminders.

In actuality, vehicles with pending TVIS are blacklisted. Their pollution control certificates will not be updated anymore. Thus, they can’t be sold or transferred.