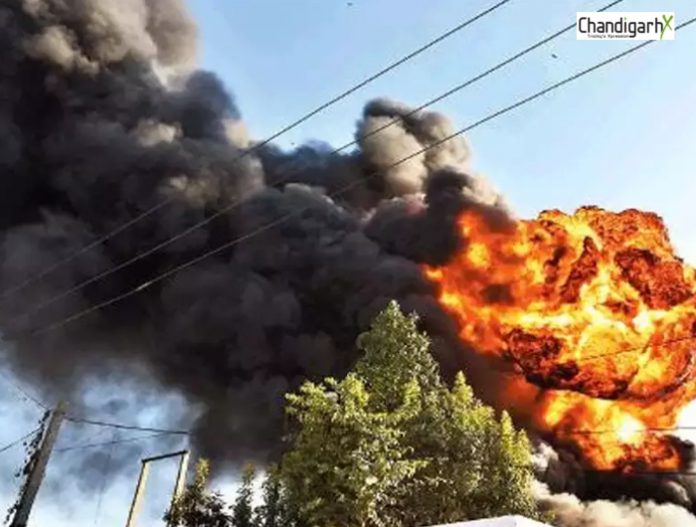 Panic gripped the area as 10 blasts were heard one after the other. Plastic containers were flying high in the air. Flames and smoke engulfed the area within minutes when a godown went up in flames at the Industrial Area, Phase 7. The site was used for storing thinner and chemicals. Once again, this incident brings to the fore lack of fire preparedness in factories in Mohali district.

The godown belonged to Chem Tech Industries, involved in manufacturing paints. It is owned by two brothers Satpal Garg and Kishan Garg. While chemicals were stored in the godown on plot number C142, packing was done on plot number D127, opposite the godown. 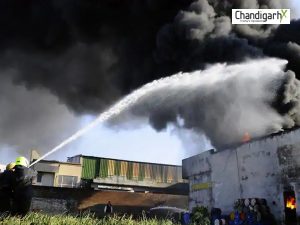 Satpal and four workers were present on the premises when a minor spark led to a fire. The spark was caused by a chemical reaction while filling a container. The fire took place at around 3 pm. The worker who was filling the container jumped over the closed gate to save his life.

“I was having lunch when one of the employees rushed to inform me that fire had broken out. By the time we rushed out, flames had engulfed the entire godown,” said Satpal.

The fire brigade was informed around 3:45 pm. It reached the spot within 10 minutes. It took five fire tenders from Mohali, that made 20 rounds to refill water. The blaze was under control around 6 pm. Two fire tenders from Chandigarh were also pressed into service around 5 pm. No injury was reported.

The factory owner failed to reveal why there was a delay in making the emergency call.

In grave violations to fire-safety norms, the godown on the 4 kanal plot had tonnes of liters of chemical. “The factory did not posses a valid no-objection certificate (NOC). There was poor fire-fighting equipment both in the godown and the packing unit,” said Jaideep Sehgal, sub-divisional magistrate (SDM), MOhali.